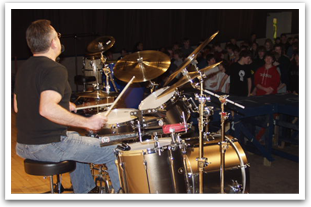 Bobby, the son of Puerto Rican parents, was born and raised in the “Fort Apache” section of New York City’s South Bronx. Inspired and encouraged by maestro Tito Puente,another fellow New York-born Puerto Rican, Bobby “got serious” and attended Boston’s Berklee College of Music from 1975 to 1979, obtaining a Bachelor of Music degree and receiving their prestigious Faculty Association Award for his work as an instrumentalist. Since his graduation, Bobby has become a leader in the Afro-Cuban, Brazilian and jazz fields as both a drummer and percussionist, and is recognized as one of the most articulate musician-scholars of la tradición living today